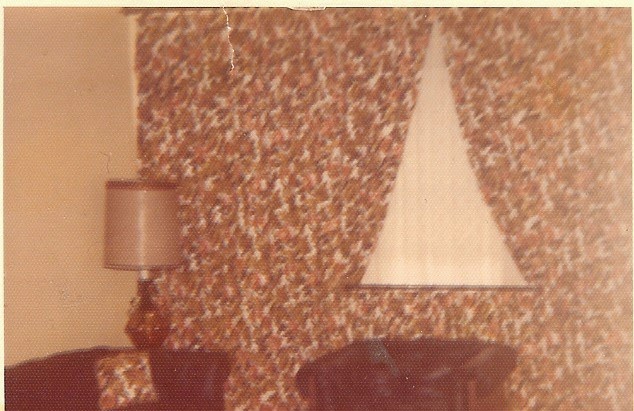 In 1971 I decorated my first owned home...  It had a tiny window so I decided to make a wall of drapery.  There was a bay window in front that I used the same material and a valance in front and there was a spider plant that someone gave me a little sprout, so I let it run wild throughout the bay window.
The next house that was purchased a year later had big windows that were high up so I decided to try the same effect.


This house was very run down when purchased and before I learned to put caps over fireplace chimneys two racoons came down and sat in the children's bean bags next to the fireplace.  I came in from the grocery to find the racoons waiting for me.  I ran in to the kitchen and sat the bags down on the counter and called the animal control.   They told me to open all the doors and get something long to chase the racoons out so I would not be near their sharp teeth.  The whole time I am talking to the Animal people the racoons are lounging on the bean bags like they own the place.  I ran downstairs and got a big cardboard roll that some of the carpeting had come on and tried to chase them out the door.  They ran into the kitchen and got on the counter and started throwing tuna fish cans accross the kitchen to each other.  40 years later  I remember this like it was yesterday.  If they hadn't been grinning at each other and me with the sharpest little teeth I ever saw it would have been hilarious.  After -- it is hilarious.  They left by the side door when they felt like it, only to return nightly to go through the trashcans and hand each other and it turned out a little crew of baby's who lined up on the railing to watch.  After holloween and a strip of lollipops that had been hanging as decoration on the doors were in the trash they took the whole string of pops and passed down the chain.... If I had only had a camera.

This was the Master Bedroom of the second home that I tried a little bit of everything.  As you can see there needed to be air flow, so we had a window A/C so I put a little decorative pinch pleated drapery the size of the unit with decorative rod and the austrian style sheer valances with fringe.


This Daybed was given to me by an aunt and it had horrible material that was scratchy on it, so I decided I could upholster..... I did..... matching Draperies and toss pillows too.


Most of the Second sets of windows were done in 1973-1974 before the impending arrival of the baby boy.....Baby's Room and accents are the next set of pictures.   This guest room was decorated in hopes of a girl..  The nursery was done in greens as we did not know it was going to be a boy.  We did have a girl after the boy.
The Bassinet was an old one that I lined with a quilted waterproof lining and attached the skirting with velcro so it could be removed.  I then added the Bunny Diaper bag in the corner and a mobile for over the baby to entertain it.
The draperies were made from a variegated green heavy decorator cotton, but simple pinch pleats and once again sheers and roller shades under the sheers.

Posted by KittyKitty at 4:54 PM